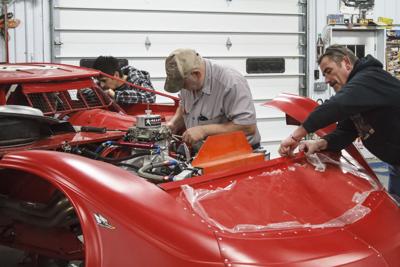 AURORA - A trip of a lifetime awaits 18-year-old Rece Vaught and his racing team when they travel to Arizona for the 13th Annual Keyser Manufacturing Wild West Shootout at Arizona Speedway in San Tan Valley in January. San Tan Valley is located southeast of Phoenix.

Vaught is a 2018 graduate of Giltner High School. He began go-cart racing at age 7 and has been racing in the late model class for five years. His current race team consists of his dad Todd, mom Christy and Todd Joyce. They’ve partnered with longtime racer and Hall of Fame driver Al Humphrey of Giltner for the six-night show in Arizona that offers $5,000 to the nightly winners Jan. 5-12 and $14,000 to the winner on Sunday, Jan. 13.

Drivers from across the country will be on hand to compete for the top prize, including one of the all-time greats - Hall of Fame driver Scott Bloomquist of Mooresburg, Tenn.

“We’ve been working with Al for some time now and we thought the time was right to give it a try,” said car owner Todd Vaught. “We supplied the car and driver. Al and his wife Lori are providing the motor coach and trailer to get us to the track. Al will also be the head wrench when it comes to making calls on setting up the car and making mechanical adjustments. He also has a wealth of knowledge and experience that will help us reach our goals.”

Bloomquist has his eyes on the biggest prize. For the young Vaught the goal is different.

“My goal is to finish at least one race in the top 10,” Vaught said. “No doubt I will be looking over and realizing I am on the same track as the top drivers in this business, I will be awestruck for sure.”

Humphrey sees the experience as a stepping stone to moving to the next level in the sport of dirt racing.

Team members agree their main goal is to get as many laps in as they can and improve as the six-night shootout moves forward.

“This car has a bigger engine in it than what Rece is used to,” Humphrey said. “So if we can get in some laps and get him comfortable he will do all right down the road in some of the big races in our area.”

One of those in-state races that’s another crown jewel for dirt late model racers is the 2019 Silver Dollar Nationals in Greenwood, Neb., July 18, 19 and 20 with an estimated $300,000 in prize money. It will reward one driver with a $53,000 payout for taking home the top finishing spot.

“There are three tracks outside of Nebraska that I want to race on before I turn 20,” Vaught said. “This one and the prestigious Lucas Oil Speedway’s Show-Me 100 Memorial weekend race in Wheatland, Mo., and to Eldora Speedway in Rossburg, Ohio, for either the World 100 or the Dream.”

Follow the team’s journey on their facebook page at Rece Vaught Racing. Coverage of the races can be seen live on pay-per-view at dirtondirt.com.

Sorry, there are no recent results for popular images.