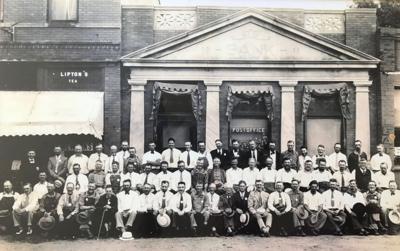 Editor’s Note: The town of Doniphan was founded in August of 1879. As we celebrate its 140th birthday this month, each week we will be sharing historic photos of the Doniphan area, as well as stories about our community and its residents over the years.

HALL COUNTY – In the summer of 1932, thousands of men in Hall County grew their beards to commemorate the county’s 75th anniversary celebration.

These men were a part of what would be called the Whisker Club. Nearly 3,000 men in Hall County paid membership dues and signed up to become members of the club.

They vowed to keep their beards and mustaches intact over the time period, May through July 5, 1932, or be subject to prank or penalty.

“All for Fun and Fun for All”

The Whisker Club slogan, “All for Fun and Fun for All,” said it all.

According to the book, “A History of Hall County, Whisker Club 1932,” the Whisker Club was a promotional event for the county that ended up even more successful than ever anticipated.

Initial goals in forming the club were to reach 300 or more members. When it was all said and done, more than 2,700 men and even one woman let their whiskers grow that summer.

The idea of the Hall County Whisker Club was first mentioned in a letter by Leo Stuhr.

Later, in a letter to the Daily Independent, Whisker Club No. 2 charter member Dr. W.W. Arrasmih, wrote, “Gentlemen: Why not a whisker club for our historic gala days in July? The writer has been privileged on two occasions to have been in the region of Deadwood, S.D., near the time of their famous Deadwood Days celebration and it has impressed him that their bewhiskered citizenry have offered more in the matter of publicity for their celebration than any other single medium.

“I would like to suggest that this be considered by the committee in charge and that, pending its approval, publicity be given the matter in the local press. As a suggestion: Permit some of us who are interested to obtain several signed lists of members (bewhiskered aspirants). Publish this list and it is the writer’s belief that 700 to 1,000 whisker boosters could be enlisted for our celebration. Besides the valuable publicity, the committee on finances saw a possibility of no small amount of revenue.”

Rules of the Club

The idea of the club met with instant approval and Dr. Arrasmith and Howard Augustine set about to formally found the club and draw up a set of rules.

Named as the club’s first charter member was Sam Bate, who “already had a fine set of glossy whiskers.”

Membership fee was 50 cents and membership lists were printed in the Daily Independent. Members came up with a list of rules, including the requirement of it being “mandatory that a mustache and the full chin be the minimum requirement as defining membership to the club,” and the requirement to wear the membership badge through July 5.

Members formed a “Kangaroo Court,” to convene at the Hall County Court House every Monday evening to deal with violators of the organization’s rules.

And the Whisker Club wasn’t limited to only male members. One woman joined the club. Madam Lavarcoe, on tour as the bearded lady with the Al G. Barned circus, joined as well. The book states she, “expressed herself tickled to death to be a member of such a unique organization.”

The local barbers union quickly came on board with the slogan, “Let ‘em grow!”

In a statement, the Barbers Union said, “We believe that the Whiskers Club to be a very good publicity and advertising stunt in promotion of the celebration. We want to do everything we can to assist in sponsoring the celebration and every member of the Whisker Club may feel free to come to us for advice as to shape and style of his whiskers.”

Those who shaved were subject to appearing before the Kangaroo Court, and subject to public embarrassment, all in the name of fun and promoting the county.

Some were simply given the option to pay a $1 fine, including one man who went before the Kangaroo Court claiming he thought he had joined the “Whiskey Club,” not the “Whisker Club.”

Instead of paying the fine, others chose to carry out their unusual sentences. There are recorded punishments of unwhiskered men being ordered to stroll around town wearing ladies’ clothing or being temporarily branded on the forehead with the words, “I shaved.”

There were a series of parades in downtown Grand Island that summer for men who shaved their whiskers and even for barbers who shaved a Whiskerite. In the parades, one man dressed in a child’s sunbonnet, riding in a baby buggy, entertained the crowd, while many others were sentenced to parade the streets in women’s clothing and holding signs reading “flower girl.”

In Doniphan, local resident Charles Hank Quigle, “accused of failing to grow whiskers on his chin and guilty beyond the fuzz of a doubt,” was sentenced to sit in front of Doniphan’s Burger general store downtown, disposing of a full box of plain Corn Flakes, wearing the sign, “I am a dummy.”

Fellow Doniphan resident, hardware store owner Ernest Lepin, was sentenced to wear ladies pajamas and a sunbonnet during the town’s activities that day.

The Whisker Club achieved all it set out to do and more, including a total membership of over 2,700, far exceeding expectations.

It estimated that the club brought in 10,000 or more people to downtown Grand Island for three Saturdays prior to the celebration to witness the Whisker Club parades and stunts, and club members even organized an aerial squadron that traveled to Omaha, North Platte, and McCook.

Hall County’s Independence Day celebration attracted a crowd of more than 75,000 and became internationally known for its popularity and publicity stunts.

Thanks for Posting this. That's my Grandfather R.E Lowry. On the Left, first person in the middle row. I think that is his Grocery store behind him, but not sure. Never knew that he was part of the Whiskers club.

Sorry, there are no recent results for popular images.